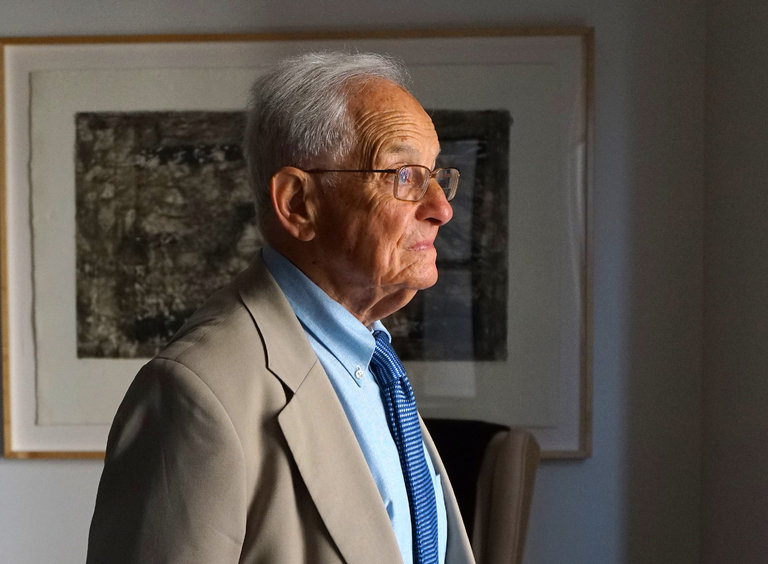 To be a Jew in Germany in the 1930s was not comfortable. Edgar Feuchtwanger, a schoolboy in Munich at the time, knew the fear and the dread shared by all German Jews witnessing the unstoppable ascent of a madman. Yet his situation was different. Very different.

In 1929, Adolf Hitler moved into Mr. Feuchtwanger’s neighborhood. With money from his publisher, Hitler took a nine-room apartment on the third floor of No. 16 Prinzregentenplatz (Prince Regent Square). It was luxurious, with two bathrooms and two kitchens. Edgar, 5 years old, could see it from his window, a building not 100 yards away on Grillparzerstrasse. And for the next nine years, until the Feuchtwangers fled Germany in 1938, Edgar lived virtually side by side with a man bent on exterminating him, his family and every family like his, not only in Germany, but as far as the Reich could extend its dominion.

Mr. Feuchtwanger (FOISHT-vanger), whose memoir, “I Was Hitler’s Neighbor,” was published last year in translation in Britain, will speak about his childhood, and the man who cast his shadow over it, at the 92d Street Y on Friday at 2 p.m. The book, originally in French, has not been published in the United States.

Today, at 91, he could well be the last German Jew alive who grew up within arm’s reach of Hitler and observed him day to day, if only in fleeting glimpses. Speaking in a relative’s apartment in Midtown on Wednesday, Mr. Feuchtwanger, a historian who taught for 30 years at the University of Southampton, in England, and now lives in a village near Winchester, recalled his brushes with Hitler, and some of the turning points in 20th-century history. He brought with him, in a manila envelope, notebooks from his days at the Gebele School in Munich, filled with assignments on patriotic themes and decorated, here and there, with tributes to the leader whom Germans were learning to call Führer.

The neighborhood, he said, was stocked with Nazis. On his way to school, he walked past the villa of Heinrich Hoffmann, Hitler’s photographer, the man who introduced Eva Braun, then his shop assistant, to Hitler. Often, he caught a glimpse of Hitler lounging in a deck chair in the garden. Not far away was the house of Ernst Röhm, head of the Nazi Party’s paramilitary wing.

“He is somewhat forgotten today,” Mr. Feuchtwanger said, speaking slowly, with the hint of a German accent. “But at the time he was considered the second man in the Reich, the only one whom Hitler had to address with some respect. When he spoke to Hitler he did not call him ‘mein Führer,’ but used the informal ‘du.’”

Röhm was soon out of the picture, arrested personally by Hitler on June 30, 1934, in the purge known as the Night of the Long Knives. Mr. Feuchtwanger knew of it long before most of his fellow Germans. Hearing jackboots and slamming car doors, he went to the window and saw SS officers assembling a motorcade for the short trip to Hanselbauer Hotel in Bad Wiessee, where Röhm and his followers were staying.

“Even as a small boy I could sense the tremendous, hot tension there was around,” Mr. Feuchtwanger wrote in his memoir. “That public events could produce such tension, that gripped one’s throat, almost took one’s breath away, is now practically unknown to the present generation.”

Mr. Feuchtwanger’s first memorable encounter with Hitler himself occurred when he was 8. He and his nanny, out for a stroll, began walking down Prinzregentenstrasse.

“Just as we passed his front door, Hitler came out, wearing a mackintosh and a trilby hat,” Mr. Feuchtwanger said. “There were some people in the street who shouted ‘Heil Hitler.’ Then he looked at me and my nanny, quite benevolently.”

Indeed. The name Feuchtwanger was well known to Hitler and the Nazi Party, and not in a good way. Edgar’s father, Ludwig, was not the problem. As the director of Duncker & Humblot, a distinguished publishing house specializing in books on economics and sociology, he was objectionable only because he was a prosperous Jew. Racial laws forced him out of the business in 1936.

Ludwig’s brother, Lion, was another matter. At the time, he was probably the most-read novelist in Germany, the author of “Jud Süss” (“The Jew Süss”), a historical novel about the financial adviser to Duke Carl Alexander of Württemberg in the 18th century. The novel, published in 1925, was later twisted into a viciously anti-Semitic film by the Nazis, released in 1940.

More offensive to the Nazi Party was his novel “Success.” Set in Bavaria in the 1920s, it included a satirical portrait of Hitler, inserted into the novel as Rupert Kutzner, a rabble-rousing garage mechanic who creates a political movement, the Truly German Party.

When “Success” was published in 1930, Joseph Goebbels announced in his newspaper, Der Angriff, that the author had just earned a seat on the first train out of Germany when the Nazis came to power. The novel featured prominently in the book burnings of May 1933. Goebbels himself turned up for the bonfire in Berlin. By chance, Lion was in the United States on a lecture tour when Hitler became chancellor, but his brother, back in Germany, bore the family name.

It was not until the mid-1930s, Edgar Feuchtwanger recalled, that Hitler assumed his full dimensions. It was still possible to walk on the sidewalk in front of Hitler’s building. Hitler had not yet taken to wearing a military uniform at all times in public or traveling in motorcades.

After he became chancellor in 1933, things changed. Mr. Feuchtwanger’s mother now complained that she could not get milk because the deliveryman was steering extra bottles to Hitler. SS guards moved into the apartment below his and took up positions on the sidewalk outside. Pedestrians were made to cross to the other side of the street.

History paraded past young Edgar’s window. He saw the fleet of long, six-wheeled Mercedes gather to depart for the annexation of Austria in 1938 and, several days later, watched as Hitler, standing erect, holding onto the windshield of his open car, greeted adoring crowds.

Later that year, he watched Mussolini’s car taking him from the four-power conference that led to the signing of the Munich Agreement. “I would join in the crowds to see what was going on,” Mr. Feuchtwanger said, recalling the periodic commotion on the square outside Hitler’s building.

Ludwig Feuchtwanger, like many Jews, misread Hitler at the outset. He believed that German Jews could reach some sort of livable, stable accommodation with the regime. “My parents did talk about the political situation, and I knew more about it than 8-year-olds do today,” Mr. Feuchtwanger said. “I knew that he was no good for us. But I wouldn’t say I was terrified.”

At school, Mr. Feuchtwanger was not tormented, by teachers or fellow students, although Nazification reached full steam by the time he entered the prestigious Maximilian Gymnasium in 1935. He was spared having to enroll in the Hitler Youth, obligatory for his non-Jewish classmates. But he did have to stand for hours at a time, arm outstretched in the Nazi salute, at school rallies organized by the party. “The way you go through it was to rest your arm on the shoulder of the chap in front of you,” he said.

He brought out two of his school notebooks. In the opening page of the first, to commemorate Labor Day 1933, he had inscribed a large swastika superimposed over the Communist hammer.

“I had a teacher who was over the moon about the Nazi takeover,” he explained.

Political reality sank in on Kristallnacht, in November 1938, when Edgar’s father was arrested and interned at Dachau. Amazingly, the camp administration failed to make the connection between his name and that of the author of “Success.” Six weeks later he was released and began making plans to take his family out of Germany. “He knew it was curtains,” Mr. Feuchtwanger said. Nearly all the Feuchtwangers escaped. One of Ludwig’s eight siblings, a half sister, died in Theresienstadt.

At 14, Edgar Feuchtwanger adopted a second life as an honorary Englishman. He studied at Winchester School, where classmates called him “fish finger” and “Volkswagen.” He earned a doctorate in history at Magdalene College, Cambridge, and went on to write studies of the Victorian era, including biographies of Gladstone and Disraeli, and histories of modern Germany, up to the Nazi seizure of power.

He reached again for a notebook. In this one, from 1934, he honored Hitler on his 45th birthday by pasting in a glowering portrait of the Führer, adorned with a Nazi eagle and swastika. Mr. Feuchtwanger smiled. “Just think, it was a Jewish child who did this,” he said.